My latest miniature gaming obsession was sparked by picking up a copy of the new Force on Force rulebook from Ambush Alley Games.  I'm most interested in playing modern asymmetrical games, so I've been busy making buildings for a middle eastern town.  Here are a couple pictures of my buildings set up on a 2' x 2' board (for 15mm scale). 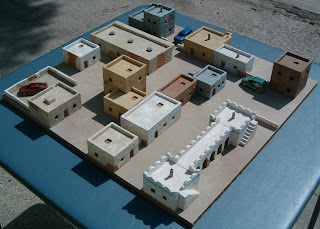 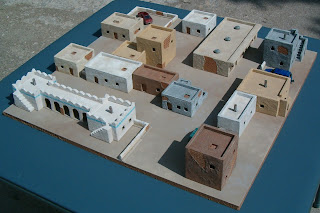 I picked up the "Operation Darkstar" campaign battle box from Rebel Minis, and the layout shown above is based on the first scenario from that set.  The buildings are all made from foamcore and have detachable roofs for placing figures inside. 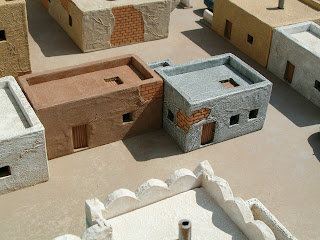 After assembling the buildings, I drew areas onto the foamcore where I intended to show exposed bricks, then covered the rest of the wall surfaces with spackling, to give give them that stucco look. 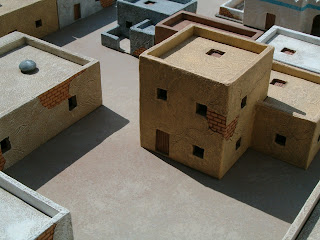 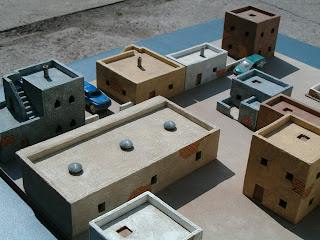 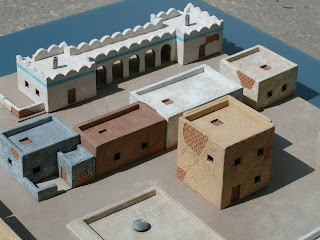 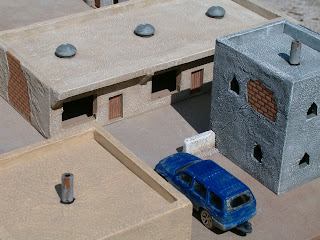 With this done, it was time to paint up the minis.  The battle box from Rebel Minis comes with 13 special forces figures, to represent Task Force Black, 24 terrorists, and 1 hostage.  Here is a picture of the three fire teams that make up Task Force Black.

I wanted my Task Force Black minis to look like they were in multicam.  I tried several variations; it was hard to simplify it down to give the right impression in 15mm.  But I'm relatively pleased with the results.  Here's a close-up of one of the four-man fire teams. 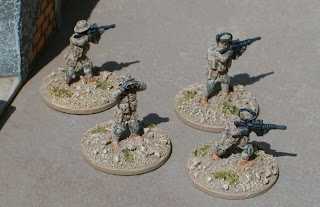 And here is a close-up shot of the five-man assault team armed with SMGs and combat shotguns. 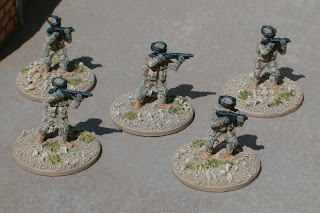 The terrorists are organized into six-man cells.  All my minis are based on 3/4" steel washers for magnetic storage.

Here's a close-up of the hostage, who appears to be in big trouble. 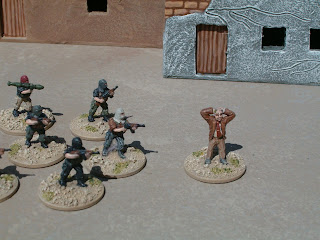 My terrorist figures have a color-coding with their hoods, an idea I got from the forums on the Ambush Alley Games site.  The leaders have very light gray hoods and the support weapon guys have red hoods.  Makes them easy to pick out of the crowd. 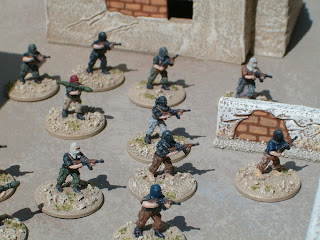 I plan to post battle reports for the "Operation Darkstar" scenarios as we play them.  So be on the look out for that.

Wow, WAY better than what I did. Congrats. Wanna trade minis? Ah well, it was worth a shot.

Just a quick question, how did you apply the spackling? I find that when I do it, the spackling tends to warp my foamcore buildings.

@MAsta_KFC: Perhaps the spackling you're using is just too wet. I know the spackling I've used for home improvement projects is wetter than the stuff I use for models. I use DAP Drydex spackling (they have it in small 8 oz. containers at my local Walmart) and spread it on in a thin layer, about 1/16", with a small spatula tool.

Thanks Bill, I might change out my spackling type.